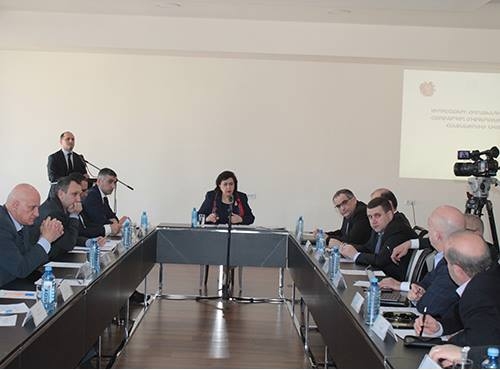 On 5 April, the Inter-Agency Commission on Coordination of Syrian-Armenians’ Issues held its subsequent session at the Ministry of Diaspora of the Republic of Armenia. The session was chaired by RA Minister of Diaspora Hranush Hakobyan and held with the participation of representatives of government agencies and members of charitable and non-governmental organizations dealing with Syrian-Armenians’ issues. Dr. Anna Yeghiazaryan, the Secretary General represented Armenian Red Cross Society.

Deputy Minister of Economic Development and Investments of the Republic of Armenia Tigran Khachatryan delivered a report on the training courses for Syrian-Armenian businessmen and the programs aimed at helping their businesses grow. The speaker stated the five areas in which the Ministry provides assistance to Syrian-Armenian businessmen, including the need to fund business plans, create a center for the production of textile and leather products and engage a person representing the economic interests of Syrian-Armenians within the council for small and medium enterprises adjunct to the Prime Minister of the Republic of Armenia.

Summing up the session, the Minister of Diaspora expressed gratitude to all the state, non-governmental and international organizations and institutions for their work. She attached importance to the Syrian-Armenians’ economic integration and asked all the organizations to set aside a certain component of their programs to help Syrian-Armenian businessmen. The Minister particularly stated the following: “We need to do everything possible to make sure the issues of the Syrian-Armenians are solved quickly and in a coordinated manner and make sure they settle in Armenia.”