Red Cross humanitarian mission started activities in Armenia back in 1877, when in the Erivan province Finnish Red Cross hospitals were established, as well as in 1896, when American Red Cross volunteer Clara Barton was providing assistance to Armenian population doomed to disaster under Ottoman Turkish rule.

1920 ...It was a difficult period of time for the country, fight for independence. On the one hand poor agriculture and industry, on the other hand, war that resulted many refugees from Western Armenia. Hunger, squalor, disease, mottled, typhoid, cholera, malaria, dysentery were taking many lives.

And regardless of the fact, that numerous and diverse problems facing the newly independent state, to have such a structure as the Red Cross was not so easy, however, a group of social workers with the help of doctor, scientist, public figure Spandarat Kamsarakan, established Armenian Red Cross National Society. On 19 March in 1920 Parliament of the First Republic of Armenia approved the charter and the company was named as "Red Cross Society of Armenia ".

From the first day of its existence, the newly established Red Cross Society of Armenia, despite limited conditions, started the difficult task of healing the sufferings. With minor conditions the company managed to open a hospital in Keshishkend (now Yeghegnadzor), medical point and grocery in Norashen. Red Cross activists did a lot in the battlefront, where they had delivered invaluable aid to sick and wounded soldiers. 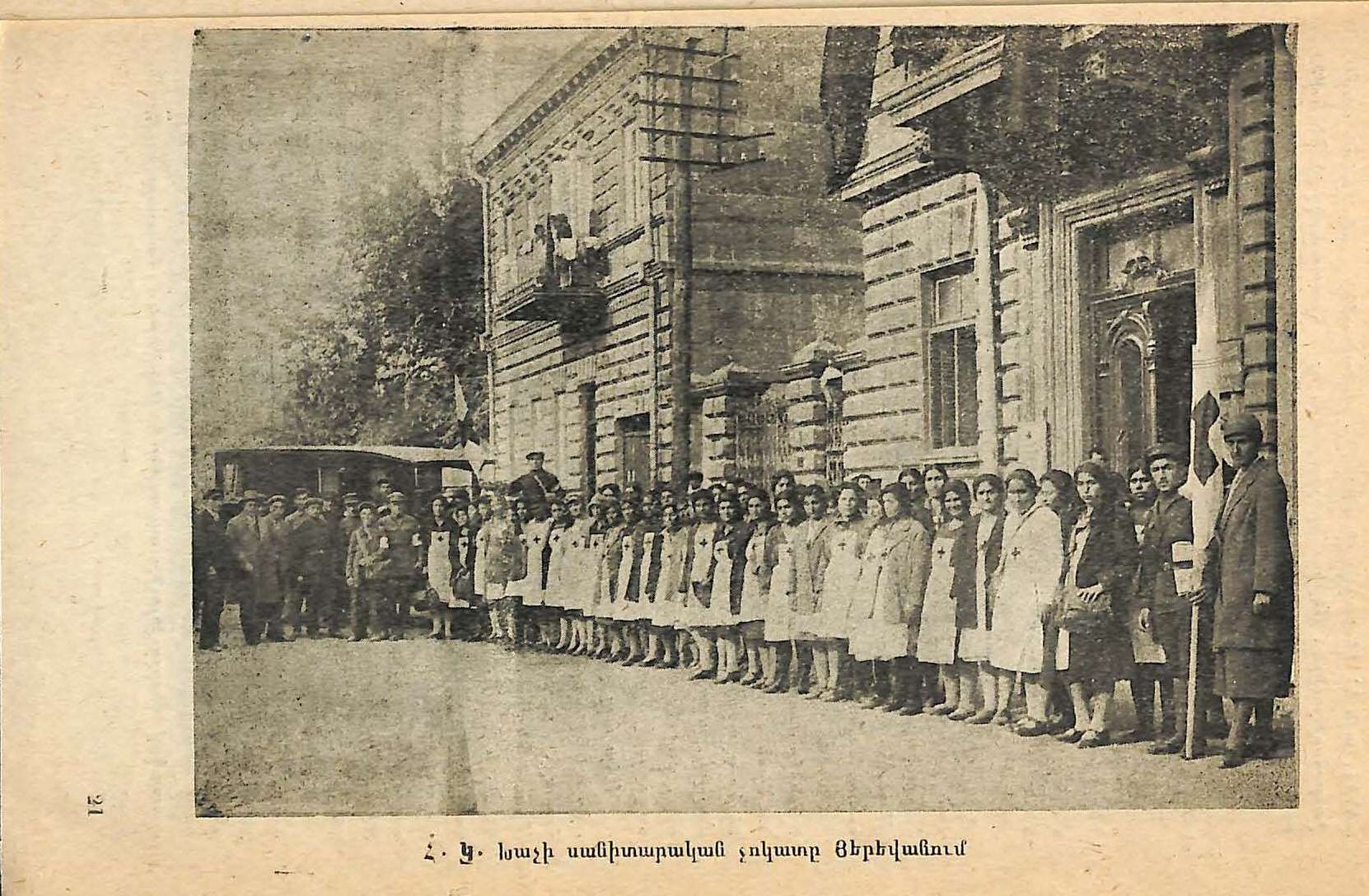 However, Red Cross Society of Armenia, as well as the independent Republic of Armenia, did not have a long life. On 29 of November in 1920 The Soviet regime was established, and on 15 October in 1921, the Council of People's Commissars signed an agreement, according to which Armenia Red Cross Society activities were marked as very important, and was decided to resume the activities of the Society. In May 1922 the charter of the Armenian Soviet Socialist Republic (ASSR) Red Cross Society was again reaffirmed and decided for the support of the activities and its regulations of the company to provide 5% of a general tax, 15% of foreign passports formulations, 2% of the income of leisure facilities and donations received from abroad.

Thus, with the use of government patronage and public and trade union organizations support, Armenian Soviet Red Cross Society first began to work by organizing material aid for refugees and orphans. It helped to immigrants refugees from Turkey, orphans, and by its own means opened orphanages for 100 children in Yerevan and Ejmiatsin, children's health care services, opened clinics and hospitals. Great achievements for the company were the first nursing courses, later was created a two-year nursing school.

The II World War broke the rhythm of life. The frontline and fight back were fighting with the "everything for front, everything for victory" slogan. During all years of war Armenia Red Cross Society has provided an invaluable service for the protection of the country and sick and wounded soldiers. The company supported immigrant families and orphaned children. Hundreds of Red Cross volunteers were helping the wounded, taking care of orphans health and education. Thousand members of the Organization were taking part in the volunteer works.

After the end of the war new problems appeared. It was necessary to strengthen the company and help healthcare bodies, engross the ranks of donors, to help the citizens to find relatives that were lost during the war. ARCS members many worthy things have done, and many of them were awarded. The company had about six hundred thousand members; it means that every fourth citizen of Republic was a member of the Red Cross Society.

December of 1988 ... The earthquake struck around the world, 25,000 dead, 19,000 wounded, destroyed homes, schools and hospitals. Earthquake destroyed 40% of Armenia's territory of about 1 million population. In the evening of December 8, the first plane with Red Cross humanitarian aid on board arrived to Armenia.

The amount of assistance provided by the international community in 1988 was unprecedented: USD 268 millions of humanitarian assistance, 1,200 temporary shelters, 8 hospitals, a polyclinic, a rehabilitation center, schools, kindergartens, and residential areas in Gyumri, Vanadzor, Spitak, and Stepanakavan, and all this programs were brought to life thanks to the joint efforts of the 46 Red Cross and Red Crescent National Societies. The Union of Red Cross and Red Crescent Societies of the USSR was very active, and was one of the first to rush to the disaster zone with its aid programs.

Just 10 days after the earthquake, a decision was made to build an International Post-Traumatic Rehabilitation Center in Yerevan to serve people with disabilities.

In August 1992, built with the help of 6 governments and 26 National Societies, the only center of its kind in the former USSR, equipped with modern equipment and meeting the highest international standards, was officially opened in Yerevan.

By the decree of the President of the Republic of Armenia in 1993, having regard to the fact that on March 31, 1993, the Republic of Armenia joined the 1949 Convention for the Protection of Victims of War, the Armenian Red Cross Society was recognized as the only voluntary, independent, autonomous National Red Cross Society cooperating with the authorities of the republic in humanitarian matters, and which carries out its activities in accordance with the fundamental principles of the Red Cross and Red Crescent Movement.

100 years later, the Armenian Red Cross Society (ARCS), with its network of 11 regional, one regional, 52 community branches, experienced and dedicated staff, and approximately 3,000 volunteers annually, is an auxiliary organization to government agencies in the humanitarian field.

The overall goal of the Society is to prevent and alleviate human suffering, regardless of nationality, race, sex, religious beliefs, class and political opinions.

1921 The ARCS resumes operations after a temporary cessation

1922 By the decision of the People's Council of Soviet Armenia, the ARCS continued its activities, the charter was reaffirmed.

1992 At the 14th Congress of the ARCS, the ARCS is proclaimed the only national Red Cross Society in the Republic of Armenia.

1993 Joined the Republic of Armenia  4 Conventions of 1949 and its First and Second Additional protocols of 1977;

1993 ARCS was recognized by the decree of the President of the Republic of Armenia as the only independent, autonomous national Red Cross company operating on a voluntary basis.

2002 The National Assembly of the Republic of Armenia adopts the RA Law on the Protection and the Use of the Red Cross of Red Crescent Emblems.

2005 the charter of 11 regional and 1 regional branches of the Armenian Red Cross Society was approved by the decision of the ARCS presidency.

2011 The Republic of Armenia joined the 3rd additional protocol of the 2005 Geneva Conventions.