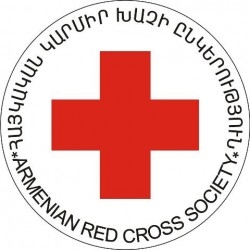 On October 19, the “Disaster Risk Reduction in Armenia” program (DIPECHO Phase III) close-out event was held at the RA Ministry of Territorial Administration and Emergency Situations. The event was attended by representatives from various government agencies, international organizations and mass media. Funded by the European Commission’s Humanitarian Aid and Civil Protection Department (ECHO) and implemented by the Armenian Red Cross Society, OXFAM Armenia, UNICEF, “Save the Children” and UNISDR in collaboration with the RA Ministries of Territorial Administration and Emergency Situations, Education and Science, Labor and Social Affairs and the Disaster Risk Reduction National Platform, the program was aimed at increasing resilience and reducing vulnerability of children and communities in areas prone to natural hazards.

Welcoming the guests, on behalf of TAES Minister and the entire staff, TAES Deputy Minister H. Mkhitaryan thanked all the parties engaged in the program and mentioned:

- This program aims to reduce the vulnerability to disasters. We all know, that despite the implementation of such measures and the enormous contributions in this field, disasters and their damages still exist, and even tend to increase. But one of the key objectives of the program is to create a culture of disaster resilience, mentality and to raise awareness. We commended the activities of all relevant stakeholders, because thanks to you, we can educate a new generation and ensure good results in the field of disaster risk reduction, - stressed H. Mkhitaryan.

Welcoming the guests, Deputy Director of RS of MTAES, r/s Major General N. Grigoryan emphasized, that Armenia has achieved great success in the field of DRR in a short period of time, which was the result of consolidated and active work.

- 25 years ago, our country had almost nothing, but today we have a powerful Ministry and all agencies, international organizations have gathered in the framework of the Hyogo Framework for Action and move in the same direction. I am confident, that “DIPECHO 4” will be even better, therefore, I wish success for the further work, - concluded N. Grigoryan.

Piotr Switalski, Head of the EU Delegation to Armenia noted, that although the program is funded by the European Commission, it is largely supported by all engaged stakeholders, whose common purpose is the creation of a new culture of sustainability in Armenia.


Movses Poghosyan, director of the National DRR Platform, presented the activities, results and achievements undertaken for this period of time by the partner organizations, which are Armenian Red Cross Society, Oxfam, Save the Children, United Nations Children's Fund, United Nations ISDR Office.

On behalf of the Ministry, TAES Deputy Minister H. Mkhitaryan handed diplomas to the representatives of the organizations including Armenian Red Cross Society, who work closely with TAES Ministry in the frames of the project.

On behalf of the Ministry, TAES Deputy Minister H. Mkhitaryan handed diplomas to the representatives of the organizations including Armenian Red Cross Society, who work closely with TAES Ministry in the frames of the project.

During the event, the beneficiaries of “DIPECHO 3” partner organizations performed spectacular drills at the site of MTAES. At the first stop, pupils of Yerevan special school N2 (school for children with special needs), on the initiative of “Save the Children” organization, presented a little performance titled “Young firefighters” dedicated to the rules of conduct during a fire.

In the second pavilion, the community volunteer disaster response teams of Oxfam and the Armenian Red Cross demonstrated their skills in the sphere of road safety in case of RTA. In conclusion, children of the UN Children's Fund from Ashtarak city primary school No.1 named after N. Ashtaraketsi performed a DRR flash mob, titled “Knowledge is life”.

Note, that launched in May 2014, the “DIPECHO III” in Armenia targeted the regions of Shirak, Lori, Aragatsotn, Gegharkunik, Vayots Dzor, Tavush and Yerevan, combining community-based activities with policy development work to develop and include disaster management and reduction in education and national security planning. The main outcomes of the program included strengthening the capacity of local communities to identify and address the needs of the most vulnerable populations in disaster risk reduction, building the capacities of children and schools in hazard-prone areas to better prepare for and respond to disasters: reflecting the needs and rights of the most vulnerable children (including children with special needs) in the national disaster risk reduction policy and integrating disaster risk reduction in education curricula.

In Shirak, Vayots Dzor and Tavush regions, support was provided to 34 communities to build their organizational and technical capacity to protect citizen’s lives and livelihoods from the impact of disasters and climate change. In Shirak region, fire protection capacity building and awareness raising activities were performed in 86 public schools.

Assistance was provided to service providers, communities and state institutions to develop and implement disaster risk reduction plans. Public awareness was enhanced, particularly, among children, to encourage application of the simplest security measures against disasters in various settings, including households.