In Search of a Safe Place 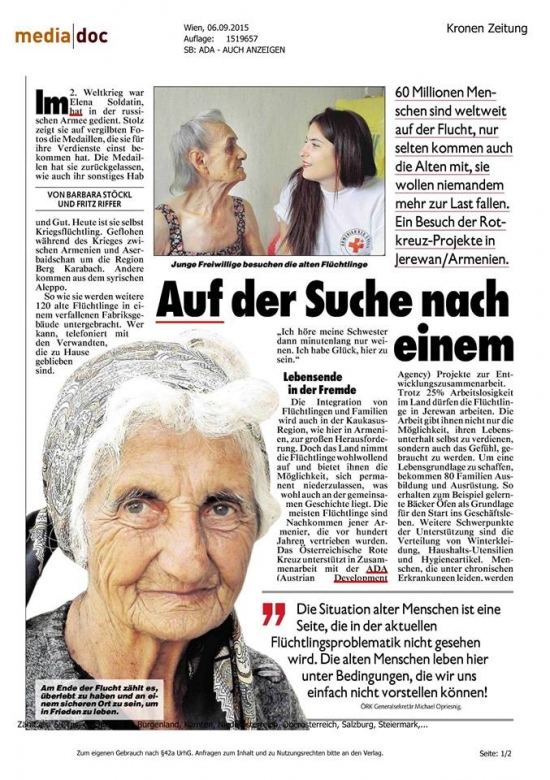 60 Million People are on the run or have been displaced worldwide. Elderly people rarely decide to leave as they do not want to be a burden to others. A visit to the Armenian Red Cross Society in Yerevan/Armenia.

Elena used to be a soldier for the Russian Army in World War II. She proudly shows us her faded photographs on which she shows us the medals she received for her military service. She did not only have to leave her medals behind, but all her belongings too. Today, she herself is a refugee who had to flee during the war between Armenia and Azerbaijan (Karabagh Conflict). Other refugees arrive from the Syrian city of Aleppo.

Elena and other 120 refugees have been accommodated in a run-down factory site. If possible, people call their relatives that have stayed home. “I then hear my sister cry for minutes, I am lucky that I am here”, says Elena.
“The living circumstances of elderly people is an issue that has been neglected in the current refugee crisis. Elderly people live under circumstances, which would be unimaginable for us.”

Aging at a foreign place

The integration of refugees and refugee families is a big challenge in the Caucasus region and also here in Armenia. Yet, Armenia favourably takes on its refugees and provides them with the opportunity to settle permanently. This certainly is related to the common history, as most refugees are of Armenian background, though have been expulsed from their homelands a century ago. Austrian Red Cross and the Austrian Development Agency (ADA) jointly support projects that help evolve development co-operations.

Despite of an unemployment rate of 25%, refugees are allowed to work in Yerevan. Employment does not only give them the opportunity to meet their living expenses, but also gives them the sense of being needed in the country. In order to create a livelihood, 80 families receive employment assistance and equipment relevant to their profession. For example, a baker by trade receives an oven to establish a base for his/her family’s livelihood. Distribution of winter clothes, household utensils and sanitary products are other important areas of support. People, who suffer from chronic disease, are provided with medicine. Great importance is also laid on frequent visits to vulnerable people.

Red Cross Volunteers visit elderly and frail people on a weekly basis. We meet an elderly couple, both being over 90 years of age. The couple has not been able to leave their 10m2 home since four years due to their frailness and immobility. They spend their days in remembrance of a long and hard life as peasants. Nevertheless, you can see their eyes shine when you’re listing to their stories from the past. If in winter, the temperature at home drops to -25°C, the small oven is put on for a couple of hours. During night, their blankets need to be sufficient.

Young volunteers are an important pillar of Red Cross’ humanitarian work. Haykuhi is 22 years old and wants to become an actress or a singer. Twice a week, she visits the run-down building at the outskirt area of the city and devotes her time to elderly people with great empathy and passion. “Each time I come for a visit, I leave in the evening with gratefulness! These people look back at an eventful life and it is a great gift for me to listen to their stories.” The young humanitarian dedicates her time and devotion to the elderly – a deed which is important for maintaining the old people’s dignity.

The Young Help the Elderly

Thea is 82 years old and is, unmistakably, still a dignified lady. Her neat appearance and the red lipstick almost look like an extreme contrast in this surrounding – yet, these apparent details show her will of survival. When she recently celebrated her 82nd birthday, she solely had one wish: the young volunteers should get her some red nail polish and polish her nails with it. She had to give away her elegant high-heals a long time ago. Now her feet are swollen and she struggles to stand up.

“Often, the elderly give us valuable advice for our lives!” says Haykuhi. “Today I told her about an argument I had with my boyfriend. She listened to me for a long time while nodding and in the end told me that ‘it’s not worth to grief about love!’ She smile like a young girl when she gave me her advice”. 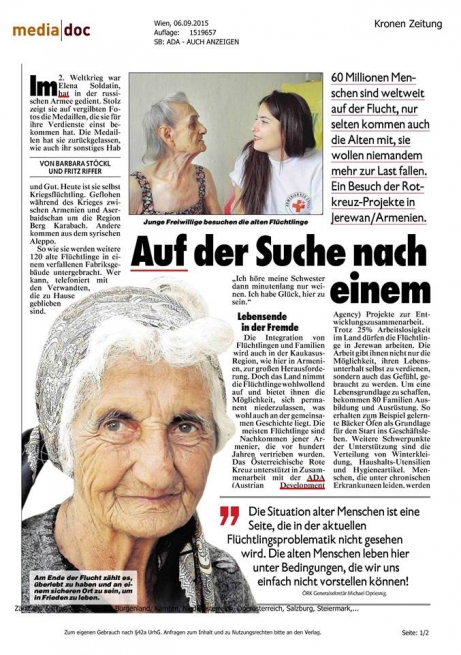 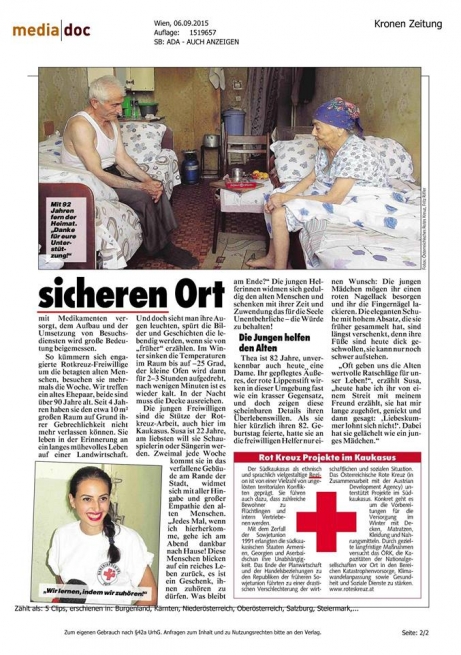