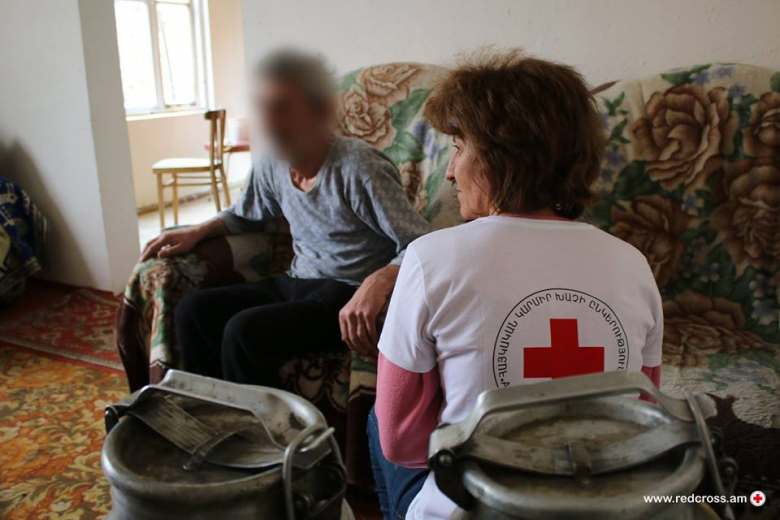 On the photo: L. G., 67 years old, has serious limitation of mobility and lives in remote area with his wife, who is the only care giver. Has limited access to health care. Identified by ARCS volunteer as  suspected TB case during the interview with special questionnaire, after which volunteer contacted medical personnel of the village to organize further testing. He registered as confirmed TB case in 12.01.2018 and immediately started treatment. He is getting his Directly Observed Treatment at home, nurse is visiting him every day.

Armenian Red Cross Society has been the main actor in the country working with TB patients and supporting implementation of National Tuberculosis Program of MoH for about 8 years.

As a Sub Recipient of the country’s TB grant of Global Fund, ARCS has been implementing “Social support to TB patients”program on the entire territory of RA and was responsible for providing social support, including psychosocial consultations to all registered TB patients in the country.  At the same time, due to the cooperation with the IFRC, there was an opportunity to work with especially vulnerable multidrug resistant TB patients, who were receiving individual consultations of psychologist and social support.

Due to efforts of all stakeholders Armenia registered major achievements in the field of TB control, the incidence rate decreased by 42.4 % in 2016 compared to 2007, and mortality decreased 3.4 times for the same period. But the issue of TB, especially multidrug resistant TB is still alarming for the vulnerable groups of populations, such as homeless people and people living in extreme poverty, working migrants and their family members. Considering this fact, in August 2017, ARCS launched  the “Active TB Case Finding among vulnerable population groups” Project, in cooperation with NTP and MoH.

In the frames of this Project, community volunteers of ARCS branches meet with vulnerable population groups, identify suspected cases and organize their further tests and treatment, if confirmed.