We are trusted and believed for already 97 years - Anna Yeghiazaryan, ARCS Secretary General 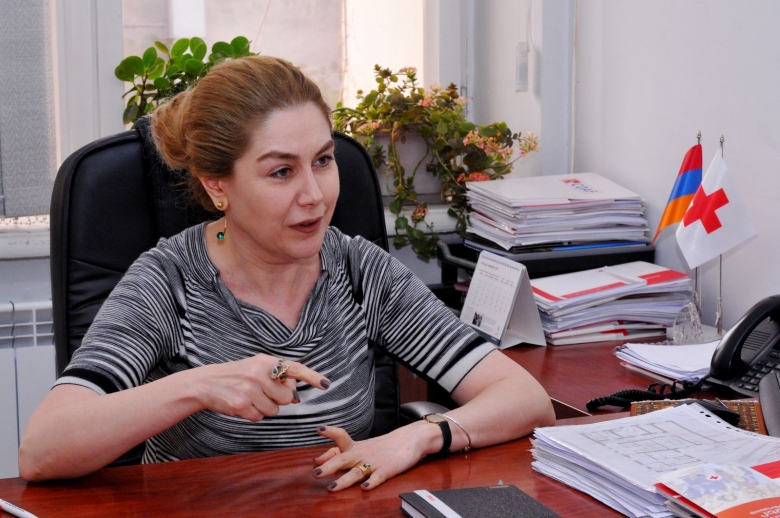 YEREVAN, MARCH 17, ARMENPRESS. On 19 March Armenian Red Cross Society celebrated the 97th anniversary of its establishment. ARCS carries out its mission through 11 regional, 1 territorial and 52 community branches. As an auxiliary organization to the government in humanitarian field, ARCS alleviates people’s suffering, mobilizing human suffering, be prepared to cope with situations, which may cause vulnerability among the population.

- It is already 97 years, that Armenian Red Cross Society carries out its humanitarian mission in the entire territory of Armenia. The most active period of the organization's activity started from 1988, when immediately after the earthquake ARCS responded to the needs of the disaster victims. The first aircrafts, with humanitarian aid for the affected people belonged to the International Red Cross Family. Then, year after year, the organization's activity gradually turned from social assistance to development projects. To face the challenges, we have to step in line with the recent changes, and today we work on the following strategic directions: disaster management, first aid, population movement, "Tracing" service, Red Cross Youth, Social-healthcare, disseminating humanitarian values.
Our activities are based on voluntary service and we are guided by seven Fundamental Principles of the Movement. Armenian Red Cross Society, as a voluntary organization, uses the full potential of the volunteers, and our volunteers are the most capable power in the country.

- What are the challenges faced by Armenian Red Cross Society?

- There are so many challenges in all over the World, and so many much more important issues occur, that international resources directed to us reduce gradually. Therefore local resource mobilization within the country is extremely important. We are the organization, dedicated to respond and reduce the vulnerability of the population. Our resources are limited and we define strict criteria, to support the most vulnerable groups.

- What assistance has been provided to the communities, the evacuated residents affected by the April war? As a full member of the International Federation of Red Cross and Red Crescent Societies, what measures are you taking with the conflicting side aimed at eliminating the violations of humanitarian law?

- As a first response, Armenian Red Cross Society, in the partnership with UNIHCR, conducted situation and needs assessment, using our structure, and based on this UNIHCR provided cash assistance to the displaced families.
ARCS provided psychological support to the families of the wounded soldiers at the hospitals. Giving huge importance to the Red Cross role and capacities, together with the movement we initiated Movement Contingency Planning process to get ready to response together in conflict situations.
As a result of our activities we ensure the communities’ resilience raising, so as the population is ready to cope with the challenges.

- You give a large scale assistance to the Syrian – Armenians fled to Armenia as a result of Syrian conflict. What kind of initiatives do you have in this direction this year.

- The influx of Syrian Armenians in 2012 was a serious challenge for us. We responded to the needs of Syrian Armenians from the very first days of their arrival, involving them in our projects implemented for refugees, with the support of UNIHCR. At the moment, we supported Syrian Armenians with different components, such as reception conditions improvements, border monitoring, psycho – social support, consultation, referral, economic integration, on all these activities together for about 2.5-3 million USD was provided.
Today intend to start a new initiative with the Austrian Red Cross with new approach, aimed at economic integration of beneficiaries, which will foster RA economic integration. Our goal is to ensure their dignifies livelihood.

- Today the Humanity faces number of social and health issues. Which new projects exist in these direction?

- In social and health spheres we are implementing a large project with the support of Swiss and Monaco Red Crosses. We’ve opened two centers: one in Vanadzor and another one in Gyumri, which will serve for elderly home care.
This is unprecedented initiative in Armenia, as here we talk about professional social and health care. This is a pilot initiative, and, in case of success, we plan to enlarge the circle of activites, implementing it in other communities and regions.
In the sphere of Health the National Society implements projects in number of directions, such as HIV/AIDS prevention, harm reduction, healthy lifestyle. Awareness projects aimed at prevention are being implemented periodically, as being aware and prepared is very important for being protected.

- What is the statistics of the victims from the UXOs explosions and their needs in Armenia?

- In 2012 -2015, Armenian Red Cross Society implemented “Mines and Explosive Remnants of War (ERW) Victims Casualty and Needs Data Collection in Armenia” project with the support of ICRC. The aim of the project is data collection on the victims and their needs.
As a result, data on 585 victims was collected in IMSMA Information database from all the regions of RA. All the information, according to bilateral agreement was transferred to ICRC, and in its turn, to the “Humanitarian de-mining and expertise center”. The further data collection and related activities are being implemented by the above mentioned center, and the ICRS supports the most vulnerable through its projects.